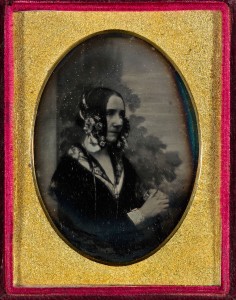 Daguerreotype of Ada Lovelace,
about 1843, reproduced
by courtesy of G M Bond

Augusta Ada King, Countess of Lovelace, (1815-1852) has been credited as the first female computer programmer. She was the daughter of poet Lord Byron, and she often described her approach to mathematics as ‘poetic science’ (Füegi & Francis, 2015). Though barred from being able to attend university, Lovelace learned all she could from mentors such as Charles Babbage and Mary Somerville (2015). She became a mathematician and writer, mostly known for her musings on Babbage’s innovative work on a mechanical calculator (Bromley, 1982).

Most accounts of Lovelace tend to focus on Babbage and his contributions to computer science, with her often reduced to a minor character (Füegi & Francis, 2015). She is sometimes not recognized with being a major pioneer behind modern technological thinking. However, by studying Babbage’s work, Lovelace was able to visualize another use for Babbage’s engine, namely, that those numbers could represent other “things” such as letters or musical notes (2015). Babbage expert, Doron Swade, noted that Ada saw that the machine “could manipulate symbols of which number was one instance, according to rules” (2015, p. 24).

So, while Babbage’s machine has now been recognized as one of the precursors to the modern computer, Lovelace’s copious notes on his machine written in 1843 are recognized to be one of the first computer programming languages (Füegi & Francis, 2015). Lovelace’s contributions have shown us that while we may see a technological tool being utilized for a singular purpose, perhaps we need to view that tool through a different lens and see what other possibilities it may yield.

Theme by Anders Noren — Up ↑