As mentioned in the book 25 Years of Ed Tech by Martin Weller, it is hard to define the start of Education Technology. Ideas and concepts often predate the invention and popularity of technology. I found this to be the case as well when investigating the roots of mobile learning (often referred to as m-learning) while studying conceptual frameworks for my course LRNT 522.

Although not well known, m-learning is often attributed to Alan Kay in 1970. Maxwell (2006) described that Alan Kay had visions of creating personal computers similar to laptops and tablets today, back in the early 1970s. This predates Steve Jobs creating apple computers and Bill Gates creating the first MS-DOS operating system, which didn’t occur until the late 1970s. Alan worked on creating what he called, the Dynabook, shown here:

“Alan Kay holding the mockup of Dynabook.” by Marcin Wichary is licensed under CC BY 2.0 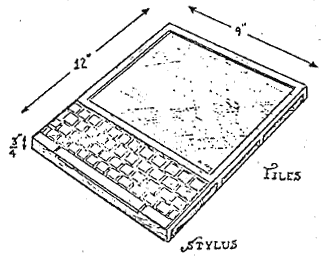 “Illustration of the Dynabook” by Kay, A.C. is licensed under fair use.

Alan (Children’s Technology Review, 2009) described his vision for the Dynabook as:

By trying different things, we realized it should be really thin, should be light, it would have a stylus for drawing on it, wireless network, flat screen display, keyboard and that stuff. So this kind of the thing I used to hold up back then of what computers should be like; it was kind of if you could have what you wanted, what should it be like? In my image here was the children would be able to play collaboratively games on it and especially games that they could make themselves and I wanted it to be able to do all the thing you could do with a book, but be dynamic.

Alan’s Dynabook actually reminded me a bit of a toy I had when I was a kid, the speak & spell by Texas Instruments.

While the Speak & Spell didn’t meet all of Alan’s criteria, such as collaboration, wireless network, and be thin and light-weight, it was a great education tool for children and will be a part of my history for educational learning technology.

Kay, A. C. (2011). A personal computer for children of all ages. Proceedings of the ACM annual conference-Volume 1.